Catalonia’s vibrant capital, Barcelona is a stunning seaside city that flaunts her beauty and sunny lifestyle. Gorgeous scenery, breathtaking architecture, and superb cultural attractions make for an alluring destination. Of course, the balmy Mediterranean climate adds to the charm. Barcelona has an atmospheric medieval quarter, the Barri Gòtic, with an almost magical old-world ambience, but it’s even more famous for its Modernist architecture. Antoni Gaudí left a lasting mark on Barcelona with his avant-garde Surrealist buildings; several are UNESCO listed.

After all the sightseeing, tourists will want to simply relax and soak up the city’s joyous vibe. Stroll down La Rambla, where the locals hang out. Escape to the sandy beaches near the harbor, and linger over leisurely meals on outdoor terraces. Wander aimlessly and find hidden town squares, where street musicians strum melodies on Spanish guitars. Delightful surprises abound at every turn. Discover the best places to visit with our list of the top attractions in Barcelona.

One of Europe’s most unconventional churches, this spectacular basilica is the most famous sight in Barcelona. The UNESCO-listed Basilica de la Sagrada Familia stands in the northern part of the city, dominating its surroundings with its 18 spindly towers soaring high above all other monuments. The Basilica of the Sacred Family is also known in Spanish by its official name: Temple Expiatori de la Sagrada Família.

Antoni Gaudí was commissioned in 1883 to design this basilica as a neo-Gothic church. But instead of following the plans, he created a signature example of his famous surrealistic Art Nouveau architecture. He had no firm ideas in mind, preferring to alter and add to the plans as work progressed. Although Gaudí had originally forecast between ten and fifteen years, the church was never completed. As a result, the main work by the most important Catalan architect of modern times remains just a shell, and nobody knows whether or when it will ever be completed.

Visitors are first struck by the lavish exterior with its expressive Nativity facade depicting the birth of Jesus, and the evocative Passion facade that illustrates the suffering, death, and resurrection of Jesus. Equally stunning, the interior is an immense space of 90 meters long by 60 meters high. The ceiling sparkles with opulent decorative details, and colorful stained-glass windows allow ethereal light to flow in.

The apse features an unusual Crucifix rendered as a canopy with lanterns. The overall effect is jaw-dropping. Gaudí best captured the essence of his architectural masterpiece when he described it as “a work that is in the hands of God and the will of the people.”

For 2,000 years, the Gothic Quarter has been the spiritual and secular center of the city. Relics of ancient Roman buildings are still found here, but the Middle Ages are best represented by the historic monuments packed into this quarter. A masterpiece of Gothic architecture, the medieval cathedral stands on Monte Tabor, the highest point in the town center. The Gothic Quarter is where Christopher Columbus was received by the Catholic Monarchs after his first voyage to the New World, and since the 14th and 15th centuries, the city administrations have had their seat here.

Wander through this delightful maze of narrow cobblestone streets and atmospheric alleyways to discover this magical traffic-free medieval world. Discover picturesque quiet squares, enlivened by the sounds of people chatting and laughing or the strumming of Spanish classical guitar. Children often play a pickup game of soccer in the Gothic Quarter’s hidden corners, and little cafés with sidewalk terraces are found in its courtyards. Along with its inviting little boutiques and restaurants, look in the Gothic Quarter for the Picasso Museum and the Plaça del Rei, a square where outdoor concerts are sometimes held. 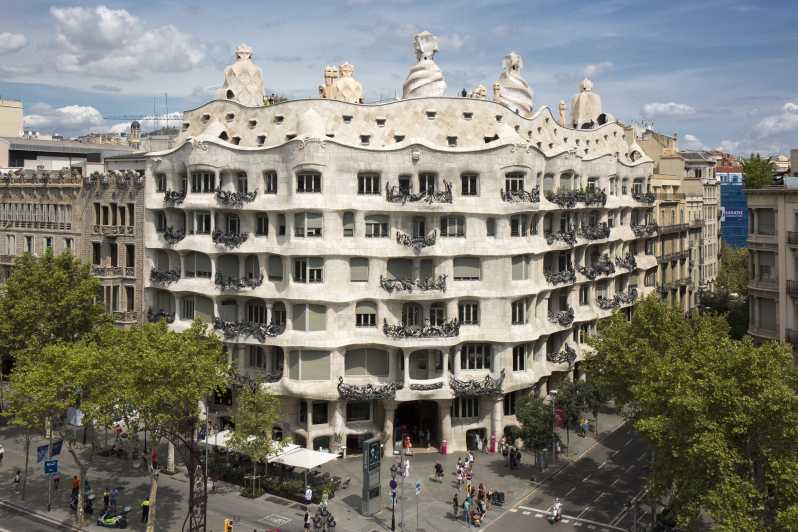 In the Eixample district off the elegant boulevard of Passeig de Gràcia, the UNESCO-listed Casa Milà is Antoni Gaudí’s most famous secular building. Casa Mila is also affectionately known as “La Pedrera,” which translates to “The Stone Quarry” because the building resembles an open quarry. Built between 1906 and 1912, this flamboyant avant-garde dwelling looks more like a sculpture than a functional building. Every line of the natural stone facade is curved, with rounded windows and metal balcony railings twining around in plant-like shapes. Even the roof has an undulating shape complemented by the decorative chimneys.

The entrance to the building is on the Carrer de Provença, through a remarkable wrought-iron gate that leads to an inner courtyard. The building is supported by ribbed arches that were designed for load-bearing purposes, a feature that reveals Gaudí’s genius as a structural engineer. Visitors may walk around the roof terrace for an up-close look at the strangely shaped mosaic-adorned chimneys. The roof area also rewards visitors with sensational views across the city, with the outlook extending to the Basilica de Sagrada Família in the distance.

Casa Mila houses the Fundació Catalunya cultural center that organizes events throughout the year. The monument is open to the public daily for visits, and audio guides are available. A welcome stop for tourists, the Cafè La Pedrera offers a relaxing place for a snack in a setting worthy of the venue.

The heart of Barcelona’s social life is found on La Rambla, a broad, tree-shaded avenue that divides the Old Town into two parts. La Rambla stretches from the Plaça de Catalunya, where the beautiful Romanesque 12th-century Convent of Santa Anna stands, all the way down to the port. This wide street, featuring expansive pedestrian sidewalks, is lined with shops, restaurants, and outdoor cafés, making it one of the most popular hangouts in the city.

During the day, many locals are found here doing their everyday shopping at the Mercat de la Boqueria and at night, groups of friends and families take their evening paseo (stroll) on La Rambla to enjoy the fresh air and lively ambience Depending on the day, onlookers might be treated to live music, a mime show, or other impromptu street performances.

On its northeast side, La Rambla borders the Barri Gòtic, and halfway down the avenue is the Plaça Reial, a lovely palm-fringed square enclosed by historic houses. These elegant buildings have arcades filled with shops, cafés, and restaurants. At the center is the Fountain of the Three Graces with a candelabra designed by Antoni Gaudí.

Another important monument on La Rambla (number 3-5) is the Palau Güell, an ostentatious mansion designed in 1886 by Antoni Gaudí. The owner, Eusebi Güell, was a great patron of the arts, and the building was constructed with a large domed hall intended for poetry readings and private concerts. The entire building reflects Güell’s enormous wealth, with sumptuous décor, valuable textiles, and handcrafted furniture created by Gaudí.

Built between 1905 and 1908 as a concert hall for the choral society Orfeó Català, The Palau de la Música Catalana was designed by the architect Lluís Domènech i Montaner, in the Catalan Modernista style. But although the building is characterized by the style’s curving lines and colorful palette, unlike Gaudi’s works, this design puts function ahead of form. Although the interior décor is just as colorful and fanciful as the outside, its shape and decoration are dedicated to choral and other musical performances.

The concert hall of the Palau, which seats about 2,200 people, is the only auditorium in Europe illuminated during daylight hours entirely by natural light. The walls on two sides consist primarily of stained-glass panes set in magnificent arches, and overhead is an enormous skylight of stained glass designed by Antoni Rigalt whose centerpiece is an inverted dome in shades of gold surrounded by blue that suggests the sun and the sky. Elaborate sculptures frame the concert stage.